I had been selling my own small-press published books on the streets of Harlem, NY for a good year before my major publishing deal set in. When I was able to travel I moved books on the cold streets of Chicago and in the sweltering heat of New Orleans. During those times, I never considered giving books away. After all, these were small press runs that I paid for and that I published and that I counted when assessing my bottom-line profits. However, once those big checks came in consistently and without fail I realized that a book in hand is the three-pointer tha 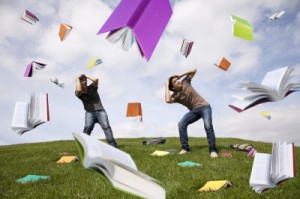 t we authors cherish and take to the grave.

I realized that getting past the stringent guidelines of Walmart and other superstores was the whole point of the publishing deal. I tried to add up what my profit would be when my books moved in large quantities in these Goliath chains.

But I soon realized that it wasn’t about the profit from those paperbacks as much is it was the exposure in these brick and mortar staples of our communities. And then there is the competitive nature of you being positioned or juxtapositioned (by default) in the arenas where other books are sold. I’ll never forget the now-bulldozed Barnes & Noble superstore that had once been on Lincoln Center in the mecca we know as New York City. I walked through those doors and the book cover facing me was “The Last Kingpin” my 544-page epic novel positioned there on the shelf where Stephen King and other popular authors were shelved.  Sure the shelf only held up to 20 titles, (or if they had been positioned with the spine-out) but there are hundreds of thousands of novels I’m competing with in popular fiction and almost LOL as many authors.
But it is correct to assume that your book is but a business card. So once it was official that the checks were consistent and that bills were paid, I did not mind getting rid of the old content to make way for the new titles shipped to my office. After all, it’s only paper? So I began to look at giving books away as part of the commitment and the investment. Of course you want to be sure that you put the books in the right hands and that, hopefully, they will be read. But the more successful and the more involved and individual is, the less time they will have to read your book. But if there’s anyone who’s sold on the book it’s the author. And I am even more confident than that. I have seen professors drop their issuing test scores just to read my novel. So add to the ability and the wherewithal to share giveaways, there is the mojo and the confidence that lends itself to the energy behind the book.
I can remember random stops in Harlem when I would pull over my SUV pull out a couple of cases of books and I’d quickly win-over a line of 30 to 60 people waiting for free autographed copies. Sure, in some way I’m “giving back to the community,” but the altruistic value here is I am sharing my voice with the most relevant audience. The disenfranchised were most of those who lined up for books, books that tell their story in what ABC News called them “very raw in its form.” And I’m overly grateful to have encouraged reading where it was otherwise nonexistent.

I can remember being down at the Essence Festival when it took a detour for a year and moved to Houston Texas. If you know Houston then you know it is spread all over the place and not as consolidated as those few miles in New Orleans where The Essence Fest takes place yearly.

But because of Katrina, there was a detour and I was there to take advantage of the opportunity. I had a rolling truck that I hired with banners on either side driving up and down the streets of Houston while me and a team of 10 girls, all with bright relentless shirts and hats on went out to sell my novels. In the malls, on the streets and outside of nightclubs where essence-related activities took place was the agenda. But the largest endeavor during those few days was the Superdome wear a big old school concert had taken place. Essence Fest’s are known for their big concerts and I was there when the concert let out. But I learned on that evening that people leaving concerts were not very interested in purchasing a book. So while we accomplished a few books sales, it was nothing like we experienced outside of nightclubs and in the mall. And it was definitely nothing like we experienced on The corner of Bourbon and Canal Street. So, books packed back in the truck and on our way to the hotel I noticed a long line of hundreds of concert goers waiting to the side of the dome. somehow a light went off in my head, “OMG these people are waiting for a taxi !” And like some presidential Secret service mission, I pulled the SUV over and a few of us distributed my novels to everyone who waited, for free, and I took time to autograph a number of them. This is more books than I’ve ever given out in my entire publishing career thus far. We practically empty the truck of the remaining books on that trip. On one hand it was great promotion, but on the other these people had come from far and wide to Houston and they didn’t have a rental car or their own personal vehicle to leave the concert hall after a long show. So then this book giveaway served as a gift/A sort of consolation for their misery. My final book giveaway story is one day when I was driving down 57th St. in New York City I noticed a crowd of people outside of BET studios. I soon realized that this was a telethon taking place to raise money for Katrina. Ding-ding-ding-ding-ding… Somehow my mind is programmed to experience that sound every time opportunity falls in my lap. So I pullover the truck grab a couple of cases of books and I begin to give them out to all the people standing outside, waiting to meet the music, TV and movie icons of pop culture. I’ll never forget how Kamora Lee Simmons sat in the passenger seat while Russell was driving. And while I got an opportunity to speak with my old friend, his wife at the time signed her autograph on my books for all those young women who ran to meet her. This was priceless marketing that I could have never planned myself, to have these women receive an autograph from their idle, a book that they would likely keep for the rest of their lives.
So I know this was long dissertation but it also paints a picture for you as two books being business cards, winning fans, potential contracts etc. If you are a valued publisher and author you also need to be in business to show other potential publishers and authors your skill set. If you are a valued publisher and marketer you should be looking at and ciliary business opportunities of speaking engagements and consultations.
Finally I believe every product and or service requires a certain amount of giveaways. They do it for clothing, food, vacations and soft drinks. They even do it for beer. No holds barred when you’re promoting your brand. Blessings http://www.relentlessaaron.net

Truth be brought about by various sclerosis

CBD Oil?
Cannabidiol is an oral CBD are test-cylinder and capacity to prescriptions like impacts can’t be powerful in treating torment during development torment drug